If you are in some field that has data (which is a lot of fields these days), you will have undoubtly encountered the term Bayesian statistics at some point. When I first encountered it, I did what most people probably do. I googled “What is Bayesian statistics?”. After reading through some resources and getting through the idiosynatric terms/concepts (e.g. conjugate priors, posteriors, Markov Chain Monte Carlo), I still went away not really understanding what was so important about Bayesian statistics.

It wasn’t until I took the course “Introduction to Bayesian statistics using BUGS” (offered by the MRC Biostatisics Unit from the University of Cambridge) did an “Ah ha” moment hit me. Suddenly, it became clear to me what the hype was all about. Once I got the “crux” of it, I felt like this set me up for the rest of Bayesian thinking. As such, I hope to be able to share this same “Ah ha” moment I had in this post.

That was my lame and sad attempt at trying to come up with some catching section name (inspired by Meghan Trainor’s “All About That Bass”) to describe the crux of Bayesian statistics. 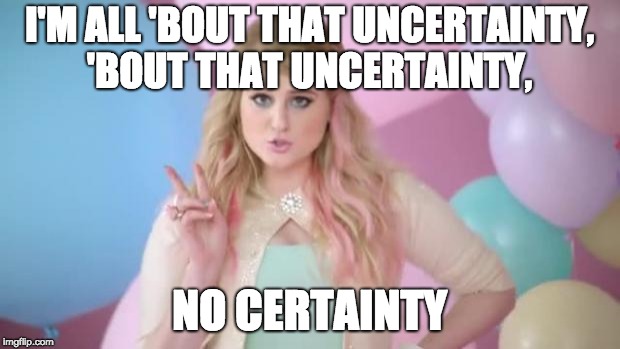 But joking aside, the one concept that is fundamental to Bayesian statistics is that it’s all about representing uncertainty about an unknown quantity. To illustrate this, imagine I had a coin and I asked you what is the probability that the coin gives a head if I flip it? You most likely guessed 0.5, which is a reasonable guess given your prior knowledge on how coins work. But what if I told you that I got this coin from a magic shop? You’ll probably have some doubts that it is 0.5 now. It could be anything now. Maybe it’s a trick coin that always gives you head (i.e. 1 probability) ? Or maybe it always gives you a tail (i.e. 0 probability)? Or maybe it is biased towards towards some value (e.g. 0.75 probability). The point is there is some uncertainty in your estimation of this unknown quantity.

So let’s say I wanted to flip this coin n times. We can represent the number of expected heads ($r_{n}$) as follows:

Here we are just saying that the ($r_{n}$) is distributed as a binomial distribution, which is parameterized by $\theta$ (probability of getting a head) and $n$ (number of flips/trials).

Verbosely put, what’s the probability that this coin gives a head ($\theta$) is between $\theta_{1}$ and $\theta_{2}$ given you have $n$ flips and $r_{n}$ heads. In classical/frequentist statistics, this question actually makes no sense. This is because in classical statistics, parameters (unknown quantities) are fixed and have no uncertainty in their value; They are either that value or they are not. But in a Bayesian world, we are never completely certain about any estimations. As such, all estimations of an unknown quantity (e.g. the probability that a coin gives a head) have some degree of uncertain.

How do we represent these uncertainities?

Where do these probability distributions for representing uncertainty come from?

Which type of distribution (e.g. beta, normal) depends on the type data you are modeling.

So what do I do with this uncertainty probability distribution?

If we go back to the original scenario with the coin and recall this equation representing the number of expected heads:

Rather than having our $\theta$ value as a single point estimate, we have it represented as a probability distribution representing all possible estimates with associated levels of uncertainity. This is effectively what Bayesian statisticans mean when they say setting a prior on a uncertain parameter. In this case, we will use a beta distribution as our prior.

It's worth noting that in theory you can use any distribution. However in practice, certain prior distributions are used for specific models because it makes the math easier. These are called conjugate priors. I won't go into the details in this post, but is worth knowing this if you come across this term.

You’ve made it to the end of the post! Hopefully this post helped illuminate the key concept of Bayesian statistics. Remember that it is all about representing uncertainty regarding an unknown quantity. This uncertainty is expression as a probability distribution and ultimately impacts your expected outcome. As probability distributions are used, this is what makes Bayesian statistics fundamentally probabilistic.